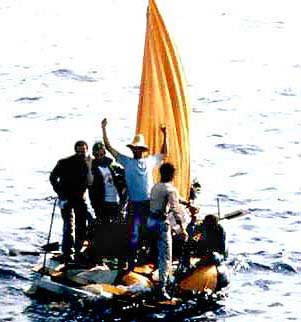 Did you ever consider paddling a raft across many miles of open ocean?

I was in the gym not long ago when a man I hadn’t seen in a while came up to work out in the area I was in. After we say hello, he mentions how hot it has been. I tell him that I personally like it hot, and we have a little dialogue about neither of us growing up in homes with air conditioning and how you just dealt with it and adjusted to it. This conversation continued for a minute or two and then he says to me “We’re soft aren’t we?”

He was speaking collectively and generally about modern society. In the developed countries like the U.S., Europe, Japan, etc. we have advanced to such a point that we have an exceptionally skewed view of what hardship and difficulty is. Do you know that about half of the population of the world lives on roughly $2 per day or less? Try feeding your Starbucks habit on that? If you don’t have a job in these places, you starve. If you don’t have a job in the U. S. you can watch tv all day and have a fridge full of food (oh by the way…you think the other side has a fridge?). I won’t belabor this point any more, but just realize that there is a real good reason why people do whatever they can(take rafts, climb mountains, walk through deserts) to get to developed nations…because they have a chance.

….complacency and entitlement. When these two bad guys set in we become a people who thinks we deserve everything without putting forth anything.

They have a chance to become whatever they want because the freedom of that choice exists. They appreciate the opportunities available and what we would consider as hardships…they are thankful for! The softness of the good life creates a couple of “future killers”….complacency and entitlement. When these two bad guys set in we become a people who thinks we deserve everything without putting forth anything.

In life we must do what we have to do…before we do what we want to do. If we do well enough, invest ourselves long enough, and work hard enough, at what we have to do, then we can put ourselves in a position where we can spend the majority of our time doing what we want to do. But this situation must be earned for 99.99% of us who don’t have wealth passed on to us. There is a couple of ways to have hardship in life from a self inflicted perspective…do little, live slovenly, and with entitlement and suffer the consequences of this choice…which will not be fun in the long run (even if there is some fun in the short run). OR work towards something of value, and endure the perceived hardships of the journey forward…the pains of personal growth and the arrows of those that would try to hold you back, the struggle of mastering…and reap the enormous personal bounty of the person you become and example you set and the people you help and….

Let’s NEVER be soft. Life will be full of struggles either way…lets all experience the struggles of using the gifts God gave us to become the best we can be.