Why the Chicken crossed the road… 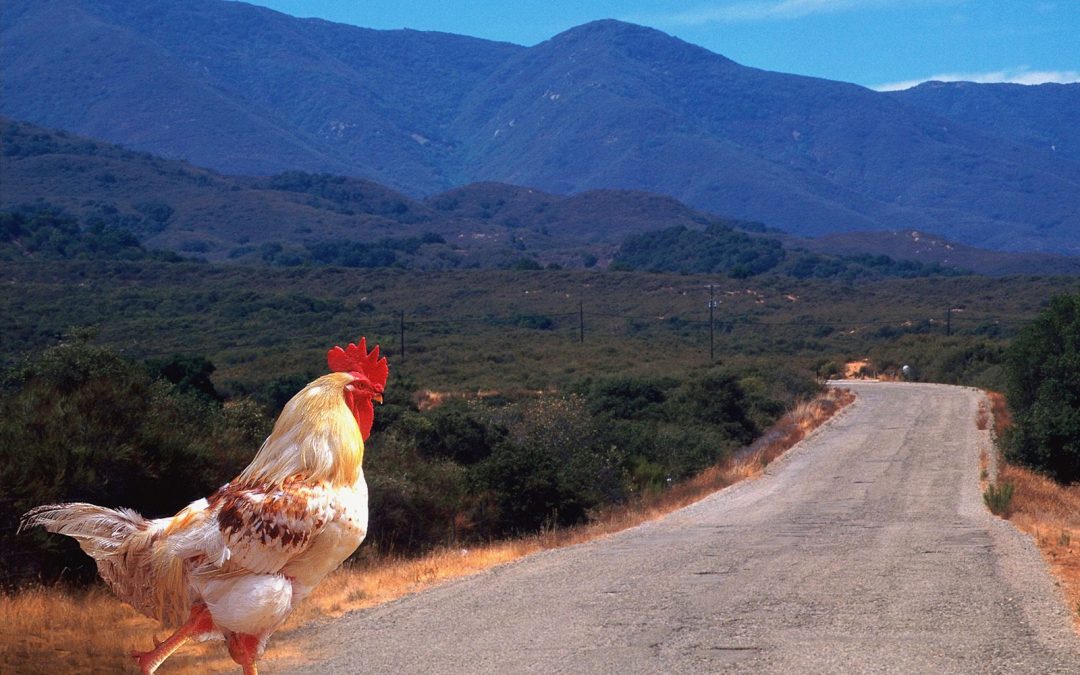 This morning as I was going about my routine, I realized the answer to the long-standing question: “Why did the chicken cross the road?”

The common answer to this question is “to get to the other side.” While this answer certainly has merit in it’s simplicity, it isn’t actually the real reason. Just desiring to get to the other side of the road would not be enough for a chicken to actually cross. What if there was a salivating hungry dog standing directly across the road? Do you think the chicken, looking at the dog, would walk directly into it’s hungry waiting jaws? Maybe you say, “hey it’s a chicken, it wouldn’t know any better.” Uh, yes it would. I have seen a chicken near a dog and a chicken knows quite clearly that a chicken dinner is high on a dog’s list. A chicken, upon seeing a dog, will run as fast as it can to get away from a dog and make all kinds of noise to warn his chicken friends to run too. God gave chickens a survival instinct too.

Why don’t we cross roads in our life?

It is the same with us too. Why don’t we cross roads in our life? What keeps us from taking the paths we desire? Is it the fear of death, like the chicken who won’t cross? NO, in most cases we have no reason to contemplate the possibility of death in our choices to pursue a course or not. In today’s world our fears (or you could say misplaced survival instinct), are more psychological than physical. They are perceived fears, based on a mixture of signals based on the inputs of our past, and mixed in with some of our present and then topped off with a dose of thinking the worst about the future. Most of the stuff that keeps us from crossing the road isn’t real now, and likely never would be too bad…certainly not bad enough to sacrifice dreams and possibility for. Yet we many times don’t cross do we? We look back years later, with the knowledge of what we have become now, and see that we could have crossed those untaken roads of the past…..then I observe people do the same thing again with the new roads that are presented to them in their todays… All because of a simple, correctable issue. They lack belief in themselves.

Most of the stuff that keeps us from crossing the road isn’t real now, and likely never would be too bad…certainly not bad enough to sacrifice dreams and possibility for.

All it takes to develop some self-belief is a little daily purposeful effort and then applying some baby steps consistently. A journey of a thousand miles starts with a step, and then another….but it doesn’t have to be a giant step…it can be a tiny step. A step is a step. I began crossing my roads when I developed self-belief….and I came from a place of very low self-esteem. You can too. I am happy to share more with you if you want to ask…but even asking is a road you must cross.

So, the bottom line is this: The chicken crossed the road because he BELIEVED he could. And so can you.