Lessons From the Goose 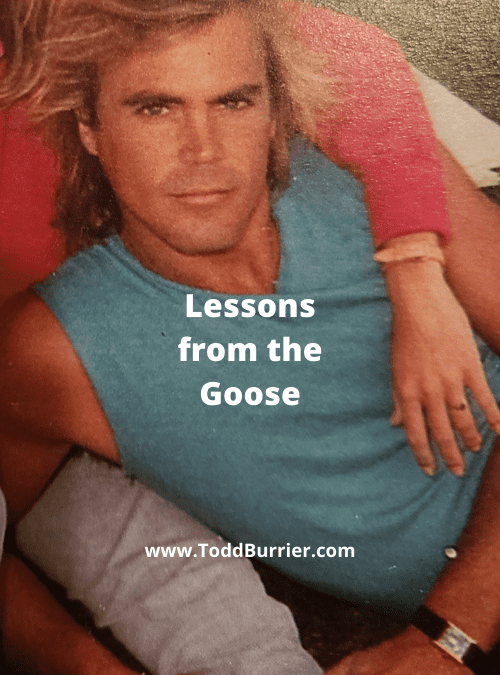 I Had a Visit With My Brother Yesterday Evening.

Not the kind of visit you might imagine though.

You see, my brother Scott, or “Goose” as I called him, passed away 16 years ago at the age of 42. So obviously I didn’t see him in person. But we visited none the less.

It was another beautiful spring evening, and I was relaxing by myself out on the back deck. I was by myself, but I wasn’t alone. It must have been something about the way the cool breeze was blowing and the birds were singing. I was leaning back in my chair with my eyes closed, enjoying the feel of the air and listening to the birds, when suddenly I could picture Scott sitting in the chair across from me. His dirty blonde hair was dancing on his head in the breeze, he had on a beachy buttoned down shirt, only buttoned at the navel (his normal look) and baggy khaki shorts with his long tan legs stretched upward and his bare feet propped on the end of the table.

He looked at me and smiled and said “What’s happening Fish?” Fish is his nickname for me, given the countless hours I spent on the water growing up. I knew of course, that this was taking place in my imagination, and that if I opened my eyes, there would be an empty chair in front of me.

So I just sat there with my eyes closed a little longer and enjoyed his company.

My brother was truly a unique character. And though we lived on different sides of the country, we always had a special closeness that stretched between us. We could go months, and a few times years, without seeing each other or even talking, but the bond never thinned.

I learned some valuable things from Scott. He was a kind, free-spirit. He loved to laugh. He laughed often and he laughed loud. Many people would say he died young, that he didn’t live a long life. Chronologically that would be true, but in reality it’s not. Sure, he left us at 42, but Scott really LIVED. He squeezed every drop of life there could be possibly found in the 42 years. He lived more in those years, than most people that live to be 90. That’s a big lesson I learned from him. Live. Sometimes I get caught up in the planning and execution of things and the worries and struggles of life and temporarily forget the lesson, but sooner or later it comes back to me, and usually Scott’s face is attached to it.

Scott lived on his terms. He made lots of decisions others close to him disagreed with. But he did them anyway. It was his life, not theirs. He walked his path, regardless of the opinons of others. This is another big lesson I have taken from him. Live YOUR life, not the one others would have for you.

The last lesson I’ll pass along to you is perhaps the most important one, and it ties the other’s in. The night before Scott slipped into a coma (he had been ill for 5 months) we were sitting together at his dining room table in his apartment in Phoenix, Arizona. We were talking about life and choices and how he had come to this place of sickness based on the choices he had made and the lifestyle he lived. He said to me how if he got through the sickness he was going to begin taking better care of himself and he was going to start a new career venture in something he had been considering.

The next morning he had a series of seizures, the last of which came as we were walking out the door so I could take him to the hospital. As he began to crumple to the ground, I grabbed him to break his fall and then sat on the sidewalk holding his head in my arms as he breathed his last conscious breath. He passed away a week later.

The last lesson is don’t wait. Any change you are contemplating, start now. Any pursuit that is in your heart, start now. Don’t wait for the conditions to be perfect to live the way you want live. They are never perfect, and you don’t know when the opportunity to live will be gone.

I am thankful for every moment I had with you Goose. Even the times you beat me up as a kid. Thanks for the visit. I love you.

This article was written in 2014. This experience is another example of why I am so emphatic about living according to the 3 Circles Living platform, and was also an inspiration for the book (among others). I hope you take it to heart, put your life in the order that brings you fruit in the things that matter most, and pay it forward by sharing the impact with others.

I continue to hear from people about how the book has helped them move to a higher, more peaceful, and fulfilling place in their life.

Here is a video I just did on Facebook about production vs. production capability:

P.S. If you would like a roadmap for living your best life, or what I refer to as your “richest life possible” check out 3 Circles Living (also available in audio book).