You’re Not Designed to Be Normal! 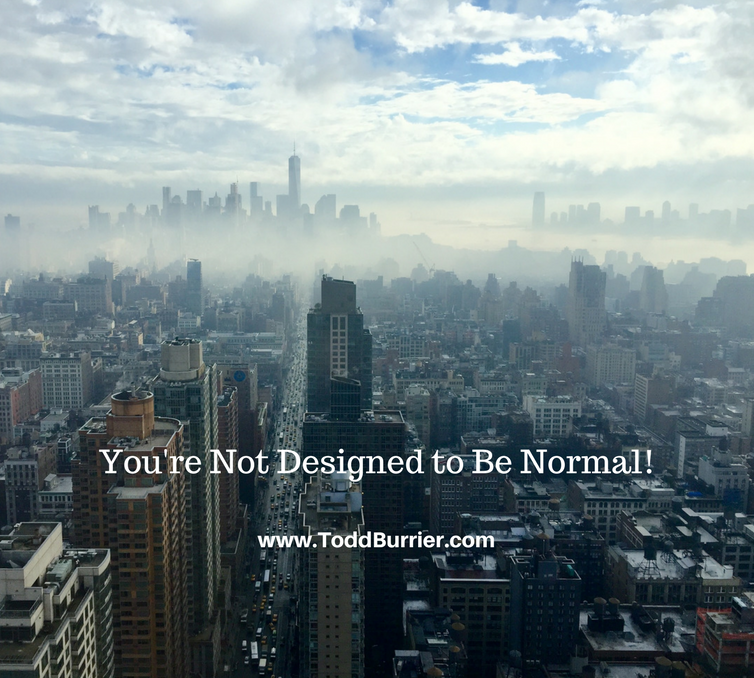 I’m very clear that I am an everyday person. No more intelligent, talented, or gifted than anyone else. But that doesn’t mean I’m just like everyone else…and neither are you. So now to the message….

Neither of those definitions are very inspiring are they? If someone asked you to describe yourself would you say I like to conform?

Yet I believe that in general a high percentage of people are trying to be normal or what they perceive is considered normal. In other words, they are trying to fit in and be accepted. I get that. We all want to be accepted…but at what price?

Human beings are social creatures. Even the most introverted of us still need to be around other people and want to feel that we matter and that people like us. This tends to make it much more likely than not, that someone’s opinion of us has an impact.

And This is Where the Fitting in Thing Can Really Mess People Up!

When we care too much about what other’s think in order to fit in. This is where the “normal’ issue comes in. I personally witness people of all ages limit themselves and settle for less in their life because what they are desiring to do or feel called to do would not be normal and they would be criticized for it.

“Here’s to the crazy ones, the misfits, the rebels, the troublemakers, the round pegs in the square holes … the ones who see things differently — they’re not fond of rules, and they have no respect for the status quo. … You can quote them, disagree with them, glorify or vilify them, but the only thing you can’t do is ignore them because they change things. … They push the human race forward, and while some may see them as the crazy ones, we see genius, because the people who are crazy enough to think that they can change the world, are the ones who do.”

Bill Gates is Describing YOU

You are meant to make an impact that only you, with your wonderful and unique combination of personality, intelligence, strengths, and heart, and more, can make. Trying to be normal stifles who you really are….

YOU are NOT normal. And neither is anyone you know. If by chance, several of the people you know are all living the same kind of life and doing all the same things, this is either because they all do the same kinds of things and that is a common ground, a huge coincidence, or….

Lots of These People are Settling for Less Than Life Could Be for Them.

Life is too short and too uncertain to settle. Live the adventure that can be you. Make the difference that is IN you.

For those of you who are working at your dream and building your home business…DO NOT let the small voices be bigger than your dream. You can do whatever is in your heart to do. Go forward in the face of the criticism, the laughter, the nay-sayers and make the impact you absolutely can make. Let those small voices be proof that you are ON to something.

Was This Helpful? Share with Your Team and anyone else it may benefit.
Many Blessings,
Todd

P.S. Want to work in a way that is simple, comfortable, fun, and with no hype or pressure, and where you grow your business, your confidence, and your influence? Want the exact recipe I used to go from a shy guy with low self-esteem starting with nothing to a top earner? The Blueprint Process Digital Training has been getting awesome reviews and will help you deeply in mastering all aspects of the process of building the business. Click here to check it out.