Tim’s joy for Others 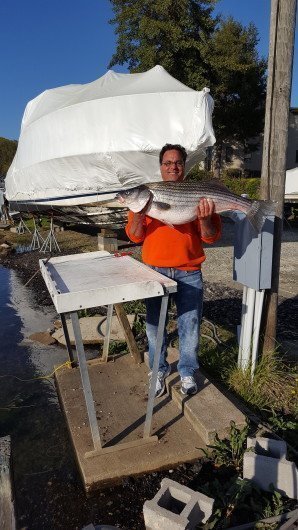 Yesterday, I went fishing with my friends Scott and Tim. It is trophy Rockfish season on the Chesapeake Bay and this was the second day of the season. Tim is the one with the boat and the expertise. He has been doing this kind of fishing for a long time, and he is a pro. The minute I step on his boat, I do whatever he says relative to the boat or the type of fishing we did yesterday.

Last year Tim, knowing I had never landed one of these fish in several times of trying over the years, made it his mission to help me catch one, because he knows how much I love to fish and he knows what a fun experience it is. He succeeded. I caught one, had the experience, and now I was looking forward to the same thing happening for my friend Scott, who had never caught one of these fish.

So we got up at 4:45am, met Tim at 6:00am and were on the water by 7:00am. It was cold in the morning but the sun rising into a cloudless sky over the water promised a gorgeous day that would eventually become warm enough to fish in shorts and t-shirts. It took about an hour to drive the boat to the area we would fish, and then it was time to put the lines in the water. This kind of fishing, trolling with multiple lines, requires a lot of effort and tried and true principles, just to get nine lines in the water, and not have them get tangled. But Tim is a master, and within a half an hour all the lines were in and we were officially fishing.

Scott was going to be the one to bring in the first fish, though he didn’t really know this

We fished until 12:30pm without a bite. Then went to lunch at a restaurant on the bay, then went back out, and put the lines back in the water again. Tim had fished the day before and caught a big one. I had caught the big one the last time Tim and I went out. So, without having to say it, Scott was going to be the one to bring in the first fish, though he didn’t really know this. Finally in the middle of the afternoon, a fish was on. Tim pulled the rod out of the holder and handed it to Scott, and the fun began. While Scott was keeping the fish occupied, Tim and I were bringing in all the other lines as fast as we could to get them out of the way (this will wear you out by the way!). Once we had the lines out of the way, Scott commenced to fighting the fish. It was awesome. It took at least ten minutes before we were even able to glimpse the fish on the top of the water a good 100 feet back from the boat. It took Scott around 25 minutes to finally get the prodigious fish to the side of the boat where I got him into the net and we lifted it into the boat.

The look on Scott’s face was worth the entire day’s effort. Both Tim and I were as happy as Scott about him landing this fish. We didn’t catch another fish all day, and we didn’t care. The joy we all got from Scott catching the fish was enough for the whole day, and is still with me today as I write this. It’s a great example Tim sets. Gaining joy from other’s joy.

In my new book Leading with Heart, I talk about abundance thinking as opposed to scarcity thinking. There needs to be more abundance thinking in the world. The understanding that someone else having a moment in the sun does not in any way diminish us, quite the contrary if our hearts are right. We should be excited for others when they have success and wins and take steps. We should be cheerleaders. The more people that do well in this world, in whatever it is, the more people that will also. It is just how it works. Abundance leads to more abundance. Tim models abundance and other’s first thinking. It’s no surprise by the way, that Tim is very successful in his work and has excellent relationships.