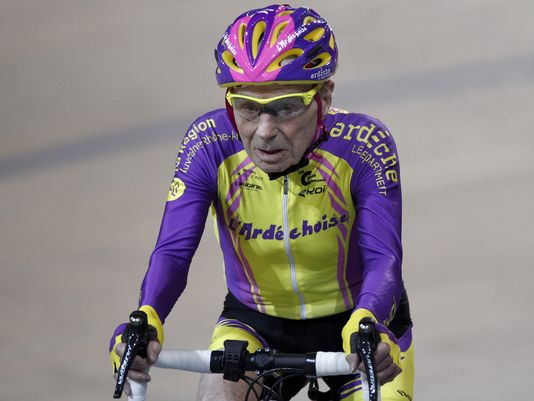 By sitting on the seat and pushing the pedals!:-)

The bigger question is how does someone get to be 105…and still be healthy and vibrant enough to ride a bike?

In case you didn’t see the recent article in the news, Robert Marchand of France, just broke the record for the 105-plus age group by riding 22.547 Kilometers in one hour. That is mind blowing. Riding a bike 14 miles an hour for an hour is a strong pace for someone HALF that age!

I would guess there aren’t a lot of competitors in that age group…but who cares!!! The fact that there is an age group means that he’s probably not the only one.

The article goes on to talk about how the President of his teenage cycling club told him he should give up cycling because he would never achieve anything on a bike. Lesson one…other people’s opinion of what YOU are capable of have nothing to do with you and everything to do with their limited thinking.

Another reference in the article was that Marchand’s coach spoke about how he eats a lot of fruits and vegetables, still enjoys a glass of wine, and exercises everyday.

Lesson two is that no matter how old you are and experienced you are, it’s good to have a coach and mentor and not assume you know it all.

Lesson three is that fruits and vegetables are the best thing you can put in your body from a food perspective for longevity.

Lesson four is that exercising daily is key to staying active. It is true that if you don’t use it you will definitely lose it. By the way, Marchand took up cycling seriously at the age of 68.

Lesson five is that you are never too old to begin a new thing and do it well.

Lesson Six is that the OPC (which I have used everyday for over 20 years for my skin, joints, allergies, and cardio and immune system) and nutrients from the wine sure don’t hurt him, though he is likely smart enough to not drink a bottle at a time!

Lesson Seven is that you have no idea what’s really physically possible if you take care of yourself, but you do know what happens if you don’t. This year was the first in a while where the life expectancy declined in the United States, and it isn’t because of the medical community. We are in the most advanced age ever for extending life, but the wrong habits will defeat this, or worse, have someone live to 105 and not be able to do anything!

What would you like to be doing when you are 105?

If you are not familiar with OPC and would like information on this nutrient email me at tburrier@gmail.com