Why Some Network Marketing Leaders Don’t Like Social Media 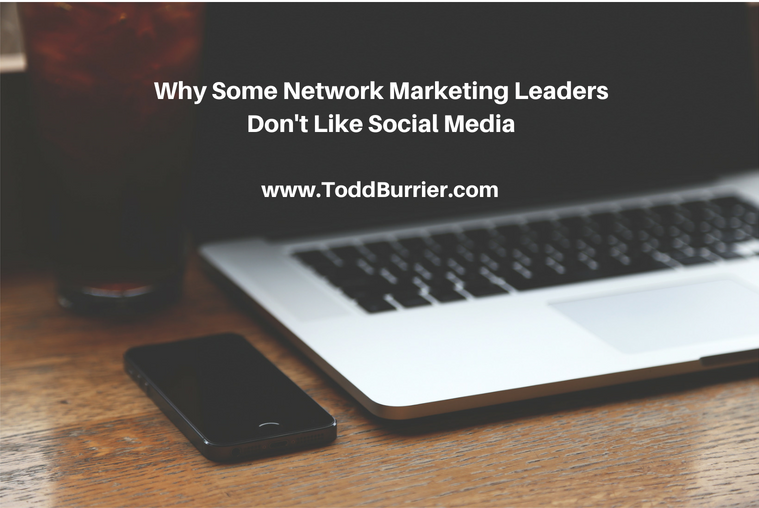 Should You be Using Social Media to Build Your Network Marketing Business?

Depending on who you ask among industry leaders, you might get an emphatic yes or an emphatic no. But you will probably not get a lukewarm answer.

I’ve been in the network marketing industry for 29 years, 28 years of which have been full time (which means primary income). I have used every type of mechanism to build the business you can think of, including social media and have used them all successfully (although many of them were very difficult for me to learn). Last year during an interview with Simon Chan, the Founder of MLM Nation (which you can view on this page) I was asked what I would do if I had to start all over right now (having the benefit of 29 years of experience), if I didn’t know a single person.

I said I Would Do Two Things, and One of Them Would be Work Social Media Like Crazy

You have to watch the interview to hear the other thing, but the question is Why would I say that? Let me preface my answer by saying that I don’t enjoy spending a lot of time on social media! So really…why would I say this?

Because  Facebook alone is a free platform with access to 2 Billion people where you can literally engage in the work any time you have available regardless of the time of day or night. I believe using social media is one of the smartest thing that someone can learn how to use as a part of how they build their business. I will always be a bigger fan of face to face conversation because their will never be anything that is better than complete and total interaction, which is why I say a part of how you build.

So Why Are Some Leaders Against it?

There are several reasons. Some of the them are good reasons in my opinion and others aren’t. I’ll explore a few of them here for you.

There is a lot of hype and garbage on social media and promoters that make the industry look bad by making it look like a gimmicky thing to make fast money. I can understand why you would want to keep people away from that.

There are a lot of people who don’t know what they are doing so they do the wrong things and it hurts their business and doesn’t reflect well on them or their company. I can understand this one too.

Both of these things are simply a matter of education. You can’t hide from social media. It is a part of the fabric of life now and it is only going to expand. This leads to another issue…there are a lot of leaders who simply don’t know how to use it themselves, so they steer people away from it instead of stepping to the plate and taking responsibility to educate themselves. I don’t relate to that one. I personally invested a substantial amount of money in learning the space properly so I could use it successfully, and teach it, because I know people will try to use it regardless of what you or I say, so leaders have a responsibility to their organizations, their company, and the industry, to learn how to use it the right way, even if they don’t choose to use it themselves.

The last reason I will discuss here is not a good thing in my opinion. This is the fear of losing control. There are still lots of people in leadership positions that think they have to be the all powerful, my way or the highway, type of leader. They try to limit people’s exposure to anything else besides their specific system or method. Good luck with that concept. That may work with some people for a period of time, but in the long run, there is simply no way to control what people are going to do, and eventually the best people will rebel. After all, one of the primary reasons to build a network is the freedom it provides. Control is the opposite of freedom.

The bottom line is that we all have a responsibility to learn how to use social media the right way. Used properly it can be a tremendous force for growing the positive reputation of an industry that does more personally for a human being than most anything else I know of. There are lots of good trainers out there (some not so good too of course) that you can learn from.

I will be releasing my Facebook/network marketing basics training in English (the German version has gotten excellent feedback) in the coming week or two (and it will be very inexpensive) in case you would like to learn from me. But regardless of who you learn from, make sure to get at least some basic training on how to use the space. In addition I will be writing a few more blogs with some more insights on how social media can help you, and some things to avoid. So stay tuned and share these blogs with people in your team if you’d like to. In the video below I provide a bit more on today’s topic.

Was This Helpful? Share with Your Team and anyone else it may benefit.
Many Blessings,
Todd

P.S. Do You think you have to be an extrovert with a super personality to succeed in network marketing? Want the exact recipe I used to go from a shy guy with low self-esteem starting with nothing to a top earner? The Blueprint Process Digital Training has been getting awesome reviews and will help you deeply in mastering all aspects of the process of building the business. Click here to check it out.