The Tiny Difference Between Success and Failure 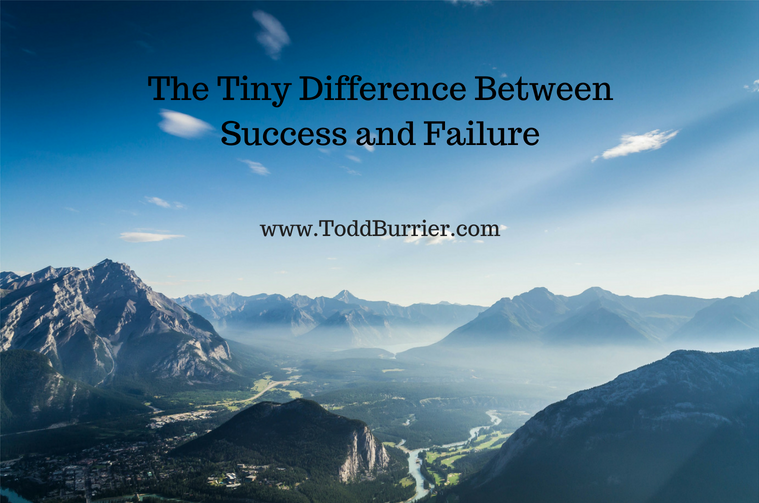 Do You Ever Wonder Why Certain People Seem to Always Succeed and Others Never Seem To?

I’ll never forget one of the first times I saw Jim Rohn speak (I was fortunate to see him several times and have dinner with him once). He said we should study success people and we should also study people that fail. He actually said something like this “take a failure to lunch and ask them how they messed up their life so bad!”

I got a chuckle out of that, and I also got his point. People who fail often show you what NOT to do, while of course, people who succeed demonstrate what TO DO.

The Biggest Misconception Is…

Let’s Look at The Common Thread for Most Failure

First how in the world do you define failure? I think it’s as simple as not making progress towards a goal. In the home business arena this happens in two different ways. The first is the most common. The failure quits. Quitting is failure. A self-guarantee. The only time this isn’t true relative to quitting is when it involves a true change of heart that leads to a different path towards the ultimate goal. Most of the time though it’s simply an unwillingness to work through whatever it takes to succeed. That is the simple truth that few people enjoy admitting. Success is hard and some people won’t pay the price for it. Instead they pay a bigger price….continuing to live below what they are capable of.

The Common Thread for Success is…

Successful people DO NOT QUIT. No matter what. Regardless of how you define success. A successful person’s mentality is that regardless of how hard it gets or how stuck they seem they have the attitude that they will figure it out some way, and that the tough times will eventually pass and give way under their sheer WILL.

The other thing that all successful people do is work consistently and learn consistently.

Does that seem too simple? It should because the biggest revelations in life are that most things boil down to the simple. And success is definitely one of these things.

I give you some more insight in the video. I hope you enjoy it.

Was This Helpful? Please share with Your Team and anyone else it may benefit.
Many Blessings,
Todd
P.S. Want the exact recipe I used to go from a shy guy with low self-esteem starting with nothing to a top earner? The Blueprint Process Digital Training is the best value in the market and will help you, and your team master the fundamentals to build the business for the long term.