How To Know Who to Invest Time In 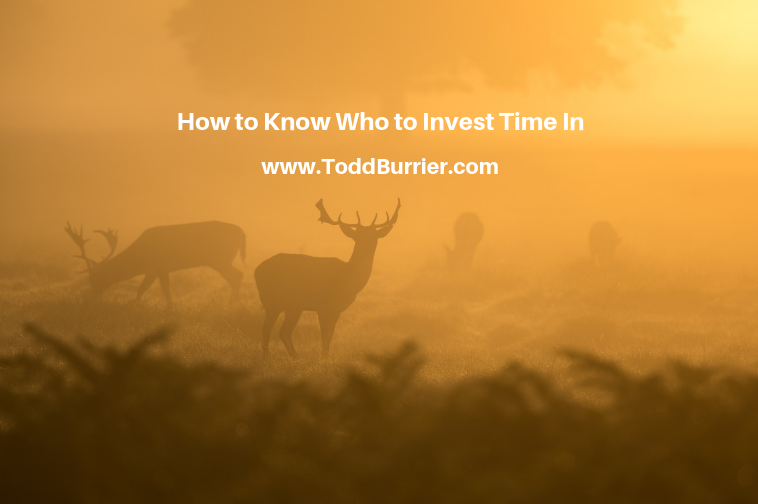 Things are replaceable…time is not. And time cost is much more than the surface loss of the time….it is also the lost opportunity cost of where else that time could have been spent.

This is one of the biggest challenges in building a team…knowing who is wasting your time. I am an over-giver. It’s just how I’m wired…so this makes me one of the best people to teach you how to look out for the time stealers….because I have had so much time taken from me in my career…I could have built two other careers with the lost time!!!

I have no problem taking responsibility for it. I am an over-giver, I believe people when they tell me something (the flip-side of being an honest person is you are easy prey for a dis-honest person), and I can see the potential in people so I have a natural optimism for what someone can and will do. All this has set me up to make the time mistakes over and over.

Even When You Know Better, You Still Will Get Burned

The tips I share below will help you immensely, but you will still likely make the mistakes. You will just learn to see the truth sooner. Most of the time. I say most of the time, because I still make the mistakes. For example, I heavily…and I mean HEAVILY invested in someone over about a several year period that ended not long ago. This is someone with tremendous ability, great credibility, who quickly became effective in the work, and that I love as a human being.

I cannot calculate the opportunity cost at this point…it’s way too high, and I am still paying the price now and will be for a long time. Knowing what I know, over these many years, whenever there was an extended time where the things I will share below were waving at me like red flags, I would have discussions with this person to see if it was time to cut the working relationship. I was clear that it was okay with me if they chose another direction. Each time, I was assured and believed that we had a basis to continue to move forward. In the end, I suffered major impacts because I allowed emotions to run over what I know…follow the recipe below and you can minimize how often, and the degree in which this happens to you.

There are three major indicators, ideally you want to look at all three all the time.

These are three simple but important things to remember. No one gets these right all the time, so try not to be too hard on yourself when you miss the mark and find yourself getting taken advantage of. My mentality is that I am glad I am an over-giver. I know that I am going to err one direction or the other. I’d rather be too supportive than not enough. I’d rather be too optimistic than not enough. One thing I know for certain…if someone fails, I know I did what I could to help them. As Ken Blanchard says “There’s no pillow as soft as a clear conscience.”

Make sure to watch the video as it has much more on the topic.