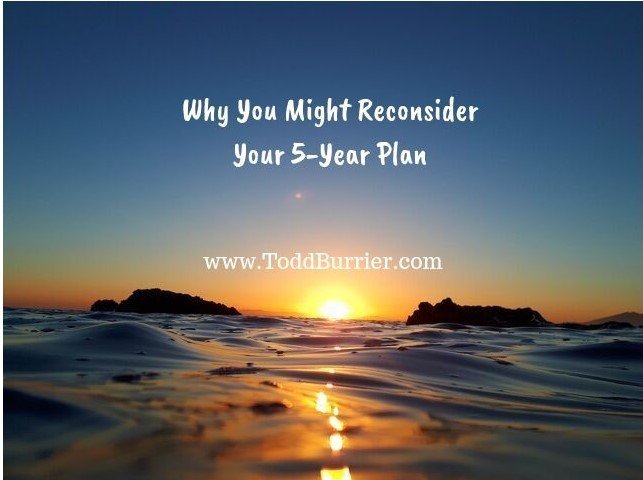 One of the Primary Things to Build into Any Long Term Plan is Flexibility.

The enigmatic former heavyweight Champion Mike Tyson is quoted as saying “everyone has a plan until they get punched in the mouth.”

In most cases in your life, when you make a plan, someone doesn’t actually punch you in the mouth, but circumstances do don’t they? Seriously, have you ever created a plan for ANYTHING that went exactly as you had planned? If you can answer yes to that, the next question would be how often? To which you would likely say once or twice…and certainly not relative to anything long term or having complexity or involving multiple people.

Planning is one of the fundamental skills that leads to proactivity, higher productivity, and better outcomes in most every corner of life and particularly in business. You must have some plan for the work and an execution roadmap. There’s all kinds of planning relative to this from basic planning to Strategic planning, and a variety of horizons in which to plan, from today to a week, month, year, 5-years, 10 years, etc.

Some things in life should have a substantial fixed nature to the basics of a plan…for example, putting away 10% of your income, monthly for the next 3 decades would be a smart plan to have if you are in your mid-20s, and do your best never to move off of it, unless you increase it. That’s just a smart thing to do in general. Even that though, would have times where you may have to be flexibile based on what life throws at you, and what mistakes you make.

When It Comes To Business…

Its relatively normal to have a 5 years plan. It’s smart to look out with vision and see where you want to be and then make a plan. Big businesses have much longer horizons than five years, while small businesses will generally have shorter horizons, like 5 years and sometimes less.

The reality is that the vision for five years is really a goal, isn’t it?

So we have a goal for where we want to be in five years and then typically we break that down into a set of strategic actions that when boiled back create a plan that can come all the way down to a single day of execution.

This is smart to do…however in today’s world there is a little thing you have to consider. The speed of change.

Gordon Moore, former CEO of Intel, and the man for which the concept of Moore’s Law was coined in 1965 was credited for “the observation that the number of transistors in a dense integrated circuit doubles about every two years.”

How does this apply to this article? Essentially this is a mirror for the pace of knowledge growth, or what is commonly called information. We are now in an age where the compounding rate of information and knowledge growth has reached doubling every year. This is astounding, and yet, it will continue to accelerate.

This essentially means, that as you are reading this, all kinds of facets of your industry are changing right now. This is affecting the way you do business and the effectiveness of what you do, even if you don’t realize it. Some of the things you are planning for a longer horizon will be completely irrelevant well before you get anywhere near that horizon and some of the mechanisms you are planning to employ will be too obsolete to even employ by the time to plan to implement.

So What To Do?

It’s actually simple…but not easy. In today’s world you have to be able to change direction rapidly, and you have to be highly adaptable or you will be run over by competitors who are. This is why so many newer entrepreneurial ventures are taking big bites out of markets in what would have been considered years ago to be impossibly fast periods of time. Think Uber. Think Airbnb.

Today, you set GOALS for five years, but the execution plans have to be taken in smaller time frames. My thinking, and I’m just one guy, and certainly industries vary, and the nature of your venture impacts it….but plan a year out.

So essentially, a five year goal with a series of one year plans. On top of that be open to the idea, that you may have to change course in some way, ie. alter the plan six months in. You simply have to be flexible and adaptable, or you will be setting yourself up for issues.

The old adage “that’s the way we’ve always done it,” outside of treating people well, and the principles/fundamentals of your process, will be suicide everywhere else for business. You have to think change. Always. I share a bit more in the video.

Was This helpful for you? feel Free to share it with others.

P.S. Have you ever considered having a coach? If you are considering one to help you make progress towards your goals, help you see the forest for the trees, and guide you on the path to success, reach out to me and let’s talk.