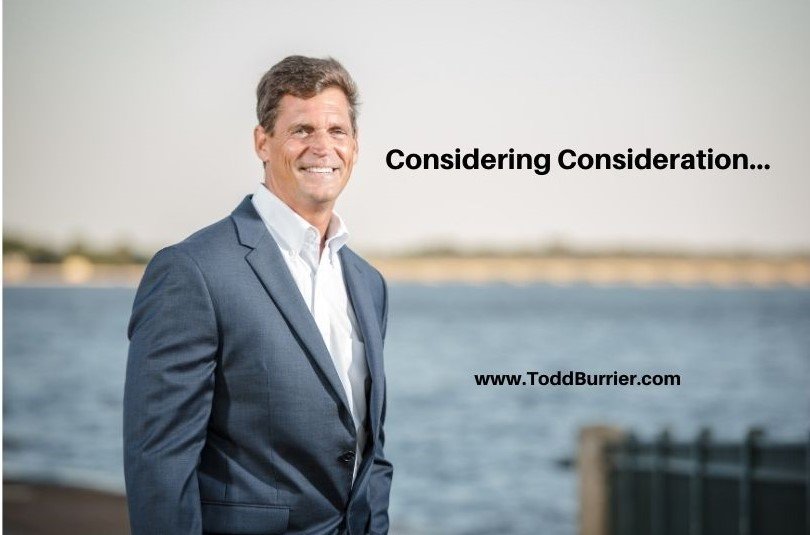 The Opposite of Consideration Could be Selfishness…

Driving home from the YMCA a few days ago after my morning workout, I witnessed, and actually became endangered by, a blatant act of selfishness. I was in the right lane of Rt. 70 the major thoroughfare that runs from Raleigh, through New Bern, and down to the beach and is the road I turn off onto our road. I was behind a guy in a non-descript sedan and traffic was a bit busy.

Suddenly, this guy in front of me realizes he needs to make a left turn pretty soon. He will need to move over into the left lane, and then take the exit from the left lane. Since traffic was steady, he was looking for a gap to slide into. Instead of speeding up to be able to merge left, he begins to slow down to wait for traffic to pass. This is not a smart strategy at any time, and especially when traffic is heavier, because it puts EVERYONE else on the road at risk. Instead of considering everyone else on the road, this guy is completely fixated on his need to make a left turn, or else have to spend an extra minute or two turning around.

He continues to slow down, and the traffic in the left lane continues to get heavier and blow by faster and faster. He doesn’t consider that everyone behind me in the right lane, is pulling out from behind me to pass and making it now impossible for him to change lanes. Eventually he slows down to 20 miles and hour! He does this rather suddenly, and I realize I might be in some serious danger because the traffic coming up behind me is moving at 60-70. At this point I look in my rearview mirror and see a big truck coming up on me, and have to literally pull off the road on the right to get out of the way. The guy in front of me at that point does the same.

I cannot possibly know what he was thinking. I believe in withholding judgement as much as possible because I am not in someone else’s shoes. In this case, though, regardless of WHY he did what he did, he was inconsiderate to the point of being dangerous.

And this leads to the first point of this article…being inconsiderate is being selfish.

Being Considerate is a Golden Rule…

Often when I am teaching, I share my golden rules of conduct. Being considerate is one of these rules. All of these rules are around how to treat people properly, not just because it’s the right thing to do, but also, it is part of creating your long-term credibility.

You cannot tell people you are of good character. You simply have to function in life in such a way, that others will naturally conclude this. My recent article on Respect, highlighted another one of the golden rules.

Obviously, situations can dictate different levels of importance, for example, the Captain of a ship is important to the mission of the ship, but in general, no human being is more important than another when it comes to humanity.

Everyone has value, a contribution to make, feelings, etc. Everyone deserves consideration. And, it’s become such a rare commodity in general, that being considerate is very noticeable to others.

A Few Levels of Consideration…

Being considerate as a daily method of operation takes practice. For much of our early life, we are selfish. We are wired this way. It’s part of our survival mechanism. As we mature, we begin to see the world a bit differently, and begin to become less and less about self.

I talk about this topic a bit in the 3 Circles Living Book as well since it is fundamental to good relationships.

Little Things Mean a Lot: Make it a point to be as considerate as possible when it comes to little things. For example, if you have a significant other in your life, and you are going to go somewhere, it could be that you are on the couch and going to the fridge, or you could be going to the store, ask if you can get something or do something for them while you are doing the thing for you.

This is an easy one, and it matters. There are all kinds of other considerations you can think of once you begin to go down this road.

One of the things I do is think about what Mel has to do. If I am in a position to do something and am available, and I know it is something she will have to take her time to do, I’ll just do it. That makes her life a bit easier.

Situational Awareness is the third thing to touch on. This is the issue I shared in the story above. Whenever you are in a situation in which you must make a choice for a course of action, you cannot do this in a vacuum. You have to consider what is going on around you. You have to consider what steps you can take and what factors/people are present regarding these steps.

You can’t just pull out into the fast land in life without looking first to see what’s going on!

Consideration is another of these little things that appears to be in woefully short supply. Of course, it is a bit of a partner with respect isn’t it?

We can’t tell others to be more considerate. We have to be the model. They’ll get it over time. Of course, you can speed the process by suggesting they read 3 Circles Living!

For today, be purposeful about showing consideration for others, and watch the magic. Then do it again tomorrow. If you got value from this please share with others.

Here’s a video where I talk a bit about the 6 Golden Rules.

If you need some coaching reach out to me.