A Tale of Two Men’s Belief 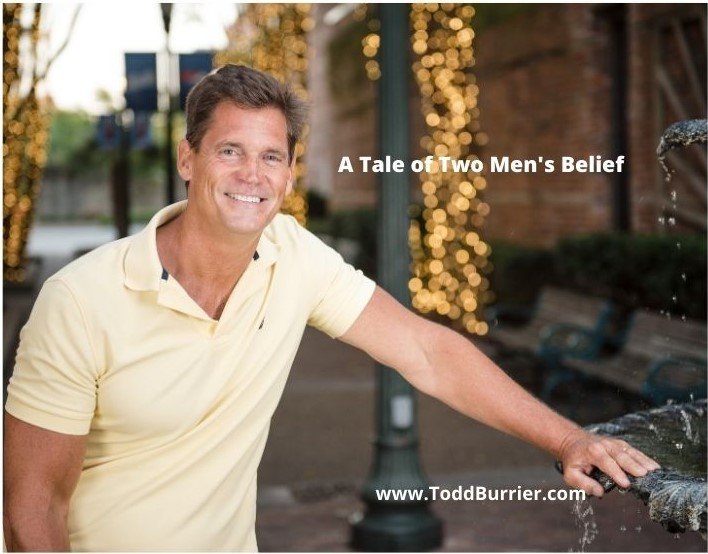 Which means your belief might be true or it might not be true. For centuries people thought the world was flat. Everyone thought this. And it was false. Most day to day decisions weren’t affected by this particular falsehood, but when you consider the concept, and then apply it personally, this is where you can begin to see the powerful relevance.

The challenge with faulty beliefs, is that lack of awareness causes decision-making disasters that not only make life harder in the moment, but affirm the faulty belief and thereby continue the madness. The following is a true example and demonstrative of why you want to work on your belief system like it’s part of your job.

A Tale of Two Beliefs

Man A: Believed that nothing would work out for him. The myriad of reasons for why he believed this to be true don’t matter because we are looking at what the actual belief leads to (we’ll deal with cause later). As a result of this belief, each time he would begin to experience success in a given area, he would find an excuse for why he could not continue to go forward in the face of any difficulty or potential difficulty, and stop doing what was leading to success, or quit the endeavor completely. Either choice led to the endeavor “not working out for him.” This was a consistent theme in his life.

Man B: Accomplishments of value are difficult and come through consistent action over time. As a result of this belief, whenever he encountered a difficult time in a pursuit, he continued to work diligently regardless of emotions or obvious setbacks and hurdles. In time he consistently yielded positive progress in all endeavors.

Both of these men (this is a true story) affirmed their beliefs over and over through their choices. This is the major point of the example. Beliefs determine what we choose to do or not do. The subsequent actions stemming from the choice lead to the results we experience. And this then affirms or refutes the belief.

Consider this: Where might YOUR world be flat? In other words, where might you be operating on a belief that’s not true? There are multiple areas where this comes into play. I saw a diagram that showed an example of beliefs as being: assumptions, expectations, ideas, assertions, conclusions, and opinions. You could go another route and look at all the contexts of beliefs, which might include religion, culture, science, societal structures, politics, etc.

The most important beliefs that affect us throughout our life are our self-beliefs. And since I like to focus on helping you be the best version of you possible, this is where this article is centered.

Your Self-Beliefs are the Roots of Your Life Experience

Outside of ourselves there is very little we can control. AND the more we attend to what we can control and develop and grow, I’ve found that the more of the stuff that can’t be controlled, becomes mostly irrelevant anyway because it’s impact in our life becomes less and less.

Your self-beliefs are controllable and changeable. As long as you don’t just roll over and believe your world is flat. One of the words used above is assumption. Instead of assuming our assumptions are true, we have to question ALL assumptions, especially the ones we have about ourselves. If we don’t question them, then we make them as good as truth, as we will act on them as if they are true.

This is where the thinking part comes in. You consider doing or not doing something, based on assumptions about yourself and the thing you are considering. If you simply choose based on your belief (which is based on your assumption), then your world isn’t going to grow very much, because assumptions are based on what you know already, and you cannot know all about the future in any direction you go. Stop and take some time to THINK about the assumptions (beliefs) and ask is this true? Do you know for certain that it’s true? (these are questions Byron Katie espouses in her excellent work)

You will find that in many cases the “belief” is not anchored in truth. Then you can go about redefining your perspective by seeking out better answers than you currently have which will lead to better choices. This is an “in the moment” tool. But what about the bigger picture overall?

This is How Man A Became Man B

Once you become aware of the power of thought, you go to work on examining and improving your thinking. This is where purposeful learning comes in, or what is better known as personal development.

Much of what we think, particularly about ourselves, does not come from us. It comes from outside influences. It is a result of the conditioning of whatever messaging we are exposed to as we grow up, in our households and communities. Then it shifts to the influences of our education systems and the social constructs we are immersed in. And then it’s augmented by societal messaging and imaging, in addition to how we feel our life is going. This aspect of our life is what it is. It goes on forever and never stops coming at us.

What can change is what we purposefully put into our own mind and what we purposefully begin to keep out. When Man A began consistently feeding his mind with positive input, encouragement, self-education, and means of self-discovery, he began to see what qualities he had to work with, and learn how to navigate “old conditioning/thinking” that led to previously destructive choices.

Consistent personal development began to foundationally change his thinking. This changed his beliefs enough to make new types of choices. The incremental positive change (feedback) served to encourage continued pursuit of better thinking and the prior spiral down became a trend upward.

This is a universal truth. This will work for you. Think about what parts of your life you want to be better going forward. Then examine your choices, back that into the beliefs, then back it into the thinking that has you where you are. Then go to work on the foundational thinking and beliefs, institute the new choices, act on these choices, and turn the corner.

I know it’s sexy and desirable in today’s world to offer overnight quick fix solutions. I don’t BELIEVE in that. Not because I wouldn’t want it. I’m human. Of course I want to short-cut pain and discomfort. I know it’s possible that this can happen, but I know that the properly thought out fundamentals executed over time will lead to progress in most anything. So if in the process, you stumble on the lottery ticket of your pursuit and get lucky, that’s awesome. But it’s not a strategy to hope for it.

Start with daily, consistent personal development and don’t stop. Then begin to apply your growth into your life. A good place to start if you need one, would be 3 Circles living.

This video will serve you greatly if you are in sales, home business, or are building any type of entrepreneurial venture.

P.S. To order your copy or audible of 3 Circles Living, click here.