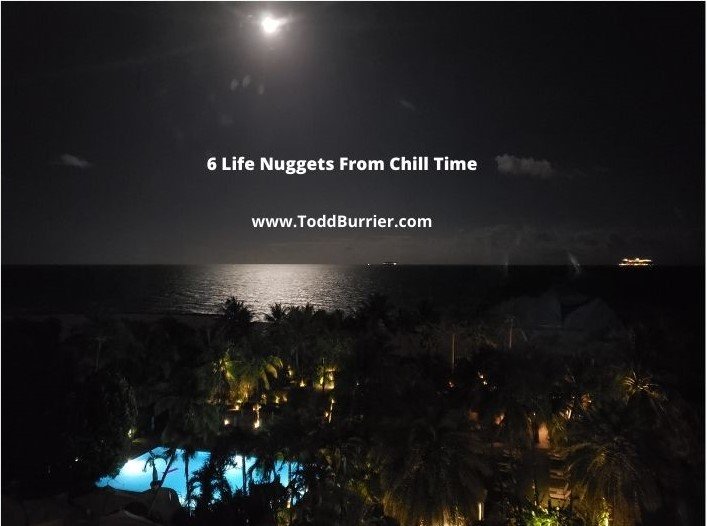 Mel and I are sitting in the Miami airport waiting for our flight home after 7 wonderful days at the Palms hotel in Miami Beach. I took the week off from content creation and engagement, and instead engaged in hanging out with Mel on the beach, playing in the ocean, Scrabble on the beach, reinstating my suntan, eating great food and having a few adult beverages.

Having said that, there are a few things that I don’t take vacations from…working out, spiritual time, personal development reading, and journaling and reflecting. As a result, today’s article is a bit different in that you will get several induvial nuggets from experiences, observations, and reflections that each could serve as a reminder for you (maybe😊) and is something you might at some point share with someone who is early in their success journey. Each headline will tip you off to the subject matter…

Even though there is lots of entitlement in the world today, there are still way more of us who struggle with feeling undeserving as we make progress in life. If you (or a striver you know) are someone who wrestles with feeling undeserving at times, I have a solution for you. If you aren’t sure what I’m talking about, I’ll make it simple…anyone who has ever had self-esteem/worth challenges, has experienced times where things are going well and they are reaping good things in their life. The tendency in this scenario, is to have anxiety about the “shoe-dropping.” In other words, you cannot fathom how things can be this good for you, and you just know something bad is going to happen. The problem of course, is that this thought-life wipes out the actual real-time enjoyment of the good fortune, or truly deserved fruits of your labor. The solution is simple…since you feel like you don’t deserve it….go ahead and just accept that you don’t deserve it, and focus on how grateful you are that you get this good stuff anyway! By the way, I am certainly not suggesting you don’t deserve it, I’m just giving you a very simple mind hack that allows you to really enjoy the fruit. Oh, and by the way, this is in line with the truth that you cannot be anxious and grateful at the same time. After a while, you will FEEL less undeserving in general.

We all have times in life where we do stuff because we want to look good. This is the “Image” issue. We are sitting on the beach and there is a guy about 5 chair rows back (maybe 20 yards or so) and he is on his phone talking ridiculously loudly, using as much machismo as he could muster, and using lots of big shot kind of words. He must have sounded like a jet plane to the person on the other end of the line. I could hear every word, and I was trying not to. This is obviously an over-the-top example of someone doing their best to impress a bunch of people he didn’t know. To what end? In the everyday world this happens more subtly…living beyond means, trying to uphold an image….the bottom line is this: You are good enough just the way you are. Anyone who needs you to impress them with “stuff and status” is probably not someone you really want to have a meaningful relationship with. Be true to yourself, stick to your values, and live with integrity, and you’ll have the right folks in your life.

Be Grateful for YOUR Problems…

Everyone has problems, struggles, difficulties, and adversities. It is an absolute in the human experience. And we all FEEL them. It’s easy to think our issues are tougher than others. They’re probably not. I am married to an amazing woman who invests her energy in helping people way less fortunate than most people that you and I will ever know. I’m talking about people who have to walk several miles a day just to get dirty water to drink. I promise you that if you really think about it, you will realize that if you have a roof over your head, food to eat, money in your pocket, and the freedom and opportunity to go after life, you are already in the vast minority of people on the planet. We don’t get a problem free life, and in fact, most of our first world problems actually make us better people in some way. I’m not saying I jump for joy about my struggles, but I sure am grateful that I get the set of problems that I generally do, and I bet if you think about it, you’ll be glad too.

Have the Pina Colada and Be Nice and Ask a Question…

Okay, this is a two-parter. First part…live by the 90% rule….do all the right stuff 90% of the time, and let your hair down so to speak the other 10%. I’m talking specifically about 3 Circles Living here. Take care of yourself. AND when you go on vacation, if you want the Pina Colada at 11am on a Tuesday, have the Pina Colada. Don’t waste a second being guilty because it’s “off your diet” “it’s 11am” “it’s Tuesday.” Have some fun. Then drop back into your lifestyle when you are back home. You gotta live a little.

Speaking of Pina Coladas…we had one on the beach. It was a classic one with the dark rum floater and the maraschino cherry and pineapple garnish. It was so tasty; I ordered another one later in the day. Only the circumstances had changed. The beach was packed. The server who was handling the beach (it was a long walk in the sand back to the resort to get the drinks) was alone. It took forever to get his attention, and then longer than forever to get the actual Pina Colada. Only this one was an entirely different story. No dark rum floater. No garnish. It was sloppily plunked in the cup. I knew the server was swamped and totally in the weeds. I said nothing about it and enjoyed it anyway (1st world problem😊).  As we were leaving the beach, we went to the service bar in the resort who makes the drinks to get something and I nicely asked if it was customary for the Pina Colada to be served with the floater and the garnish. He said it was. I then said, “oh, the one we just got served had none of that.” I told him it was no big deal but I thought he should know. He apologized profusely and made two beautiful Pina Coladas and gave them to us on the house. We never asked for anything. I would be willing to bet that a lot of people were upset and not treating the staff nicely that day. Life is a lot easier in general, in all areas, if you are nice and just ask a question.

Jim Rohn, who was a gifted speaker and impacted millions of people in his career (yours truly included), started out by guest speaking at local organizations for free. This is called attraction marketing. Eventually he commanded huge fees, but he had to create the demand first. He had to go out and provide value so others could see that value. He had to give in order to be in a position to receive.  Most speakers start this way. Nowadays there are many other ways to use attraction marketing, and it is an extremely smart thing to do, and is done in every field imaginable. Essentially you are paying for marketing with your time and talents to attract an audience that is willing to ultimately pay for your services. While we were on the beach, a young man was walking around playing his saxophone. Over a period of an hour or so, I heard snippets of it, but nothing that resembled a full tune. When he came by where we were sitting, I pulled out a $5 dollar bill and handed it to him in recognition of his efforts. At that point, Mel asked him if he would play something for us. He said that he would play a song for us on request for $20, and then went on to tell us how he was a business man and that he didn’t work for free. I had never heard this guy play and he is obviously trying to make a living by street-performing on the beach, and he wants $20 for 3 minutes? He is going to have a tough road if he believes that the fact that you say you are trying to do something entitles you to be paid for it BEFORE you demonstrate value. He would have made a lot more than 20 bucks through the week from us, had he just stepped up and gave first, served first, and showed the merit of his music. By the way, our beach got progressively more crowded each day and it was an upscale resort, and after the second day, he was never seen again. Small wonder.

Look for The Ones Who Try Hard…

We were walking through a restaurant area on our first day at the resort as we explored the place a little. The door to this area was open, and while it was clear the restaurant wasn’t open, we just wanted to see what was available. A young man (well, to me he was young…but he could have been anywhere from 30 to 50😊) who worked at the resort stopped us and said sternly “what are you doing here, this area is closed.” No “hello.” No “can I help you?” I didn’t react, but said “we just got here and were exploring, and that door was open. What time do you open?” And he told us the time (with less intensity) and we went on our way (Note: he had a mask on so I could not see facial expression, and I don’t know his nationality so I did not assume he was being rude). Throughout the rest of the week, I observed this guy…he was everywhere. He always looked like his hair was on fire. He conducted himself like he was in a position of high authority (we learned later that he was the asst. to the asst. food and beverage manager, which I’m not even sure that’s a real position), and the guy hustled. He was on it. He clearly needs some training and refining, but he has something you want to look for…he tries hard. When you are building anything, look for people who are willing to work hard (figure out as fast as you can if they are nice and honest), and then teach them the right ways. And if you are just starting out, be nice, honest, respectful, and work hard. In fact, you should work harder than what you are paid for. This is what successful people do. They don’t think any part of the work is beneath them. They do whatever needs to be done and they do it the best they possibly can.

I hope you found something in these six nuggets that is substantive for you or someone you care about.