In Order to BE a Leader, You Have to Be Willing to DO Leadership 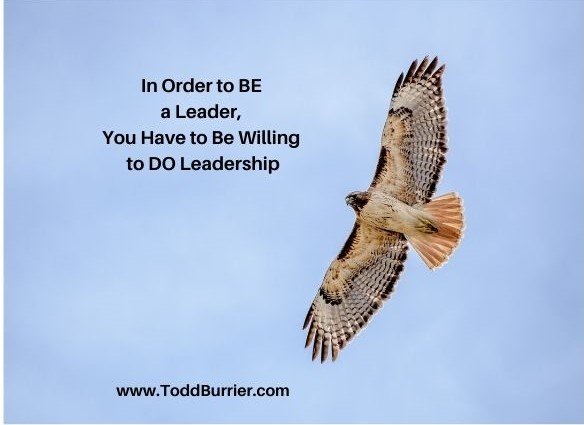 Think about it. When we are looking at anyone who has achieved something of substance and is realizing the visible fruit of the achievement, we naturally think about how cool it would be to be in their shoes so we could be having some of that fruit too.

This is especially true if it is related to something that we want to be doing or have considered doing in the past, or perhaps are in the midst of working on now.

Even when we aren’t looking at others, anytime we are first considering a big goal of some sort, we tend to think about how great it will be to reach the goal and all that will mean in our life, and that’s part of what leads us to decide to pursue the goal or not (in conjunction with how it’s connected to our values, priorities, and intrinsic drivers, although many people aren’t aware of these influencers on their actions until later in life).

It’s been said that commitment means doing the thing you said you would do long after the feeling you said it in is gone.

Leadership is a Classic Example of This.

Leadership at any level is a substantial commitment. Not just because of what you have to navigate to do it successfully, but because of the depth of responsibility it represents, given that it directly affects other people’s lives and indirectly affects many multiples of the direct effect, depending on the scope of the thing you are leading.

I’m not afraid to say that I am a reluctant leader most of the time. Not because I’m afraid to lead. I’ve led many things in my career and life and continue to lead in some capacities. The reason I am a reluctant leader much of the time, is that I understand fully what it means to be a leader. I know that leadership is truly influencing others for a purpose/outcome, and requires you to be all in. This is a massive responsibility, and one that I don’t take lightly. So I’m reluctant to take leadership roles (and consistently decline many, not all, that I am presented with), above the current ones I hold because I value my freedom immensely and leadership comes at a cost to freedom. Lots of people think being a leader gives you more freedom. This is because they don’t understand the depth of what true leadership is.

I also know it’s NOT a position. There a plenty of people in leadership positions who are absolutely NOT leaders. This is at all levels of everything, and I have seen more of these than I can count. These are the people who want to BE but not DO.

Good leaders ARE compensated well typically. They do have privileges that those in lesser roles don’t have. They are often highly respected and invited into many kinds of life opportunities than the average person.

Because they have earned it. Here’s what the BEST leaders DO to earn their way (when I say “average person” below, this is simply an analogy referencing what the general population DO, and has nothing to do with anyone’s capability):

They serve more than the average person.

They Listen more than the average person.

They care about the cause more than the average person.

They read and study more than the average person.

They do whatever has to be done. No task is beneath them.

They work harder than the average person.

They turn down more opportunities than the average person.

They make more mistakes than the average person.

They take more risks than the average person.

They admit where they are weak, and collaborate with others to ensure the weakness does not limit those they serve.

They have many sleepless nights contemplating decisions that impact other’s lives.

They are criticized more than the average person. They take it. They consider it. They learn from it. And they learn which criticism to ignore.

They fail more than the average person.

They sacrifice more than the average person.

They subrogate their desires for the good of the organization they serve.

They tolerate more whining and excuses than the average person.

The work on their skills more than the average person.

I’m pretty sure I could go on and on with this, but you get the point. Leadership is influence. Influence is the purposeful application of credibility. Credibility is a trust of your competency and your character. NONE of this is granted by position or title.

I hope this gave you a little perspective. I love teaching leadership, and I have watched many people grow and develop into wonderful leaders during my career. They chose it. They worked at it. And now they ARE it.

Below is a short video that will give you a little more of how you can purposefully work into your leadership. If you got value from this article, please share it with others.

P.S. Stay diligent in boosting your immune system. Vitamin D, Antioxidants, Zinc, etc. all give your body the resources it needs to stay strong. In addition to my normal health regiment, which has kept me living free of medication in addition to operating daily in a high energy capacity, here are two different packs that help keep your immunity high: Winter Boost Pack and Winter Boost Pack Ultra these are available to you manufacturer’s direct at wholesale.