Don’t Buy This Lie or the Excuse 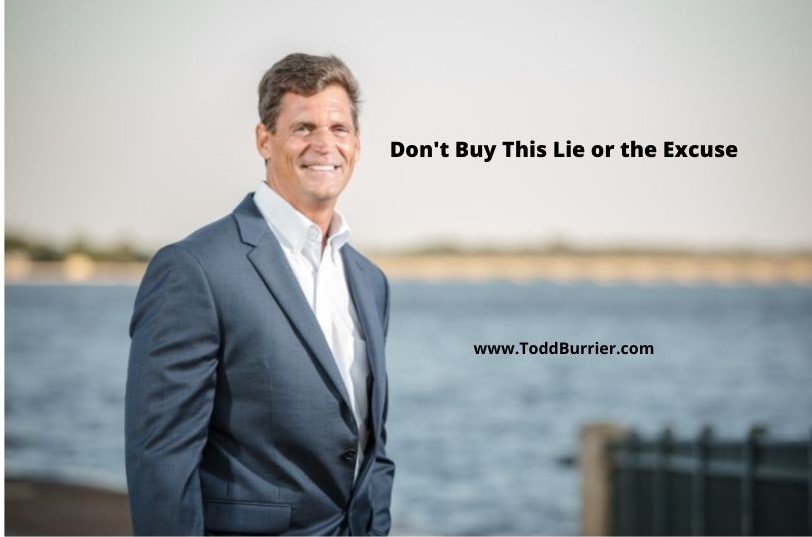 It was a few mornings ago, and I am in the YMCA willing myself through my workout. I say ‘willing myself” because it was a tough morning for me. It was one of my Eeyore mornings that I talk about in 3 Circles Living. I’ve had an over abundance of these in the past 6 months. In case you aren’t familiar with this part of my story, I have been blessed with chemical wiring that has me feeling less than positive most mornings. I say “blessed” because I have learned a lot about how to move through feelings to do what needs to be done as a result of this, and it has created a great deal of fruit in my life because I refuse to give in, as I work extra hard to grow myself and shift my attitude.

The thing about this wiring is that it doesn’t matter what reality is. The feeling is independent of logic and truth. The fact is that my life is pretty amazing as a general rule, and beyond by many miles, what I ever expected as a young person to experience. You see, I learned through this, NEVER to make excuses. You and I, we are NOT our feelings.

Anyway, I am busting my butt in the gym, when I hear this guy say to my friend John that “when you are older it’s easier to stay in shape because you have the time. Unlike when you are in your 30s and you are too busy with your job and your family to take care of yourself.” This is not word for word, but it’s pretty darn close. THAT was one of the biggest piles of garbage I have heard in recent memory, and given the world we are living in right now, that is saying something!

For context…this guy seems like a really nice guy. He is a regular in the gym and is pretty diligent. I have the sneaking suspicion that he was talking about his own life, but what do I know? He could have been just giving his general opinion. John, the guy he said it to, is a few years older than me, and in fantastic shape. He has the fitness level of someone in, ironically, their 30s ( a fit person in their 30s) even though he is early 60s. As I hear this, I sort of look sideways over at John and shake my head disgustedly, and I may have muttered a few non-niceties:-) John looked over at me and smiled a bit.

I said nothing. John said nothing. But he and I know the truth. It’s all about choices. John later shared with me, that when he was busting his tail in his career and raising a family, he got up at 4:45am so he could workout everyday. Did he have time? Yes. Did he have to make some adjustments? Yes. He did. Did he make an excuse? No. And as a result, he had a very successful career, a strong family, and the physical fruit of someone in great shape all the way into his 60s and he is still going strong.

If you don’t have time to take care of yourself now, and I don’t care what age you are, how are you going to find time to deal with all the issues poor health is going to bring? Saying you don’t have time for something is a lie. And it’s the worst kind of lie, when it has the long term result of hurting everything that matters to you.

What it really means is that you are not choosing to figure out how to get it done. Which means you aren’t prioritizing it, or you are egregiously over-committed to other things, which means you need better planning and life management skills. It could also mean it doesn’t matter to you, in which case, instead of saying I don’t have time, just say you don’t care to.

But make no mistake, if something is important to your quality of life, you DEFINITELY HAVE THE TIME, and it’s a matter of figuring out how to make it happen. I know I’m being a bit strong here, but I know the deal. We ALL have all the time there is. If you are time stressed and feel like you cannot get everything that is important done, and also take care of yourself, I suggest you stop right now. Like, RIGHT NOW, and re-calibrate because you are on a road that is not going to lead to a place you want to be.

Read, or listen, to the 3 Circles Living book, and restructure the way you do things. You don’t have to do exactly what I do, although what I do has led to an awesome life, but you do have to be purposeful in mapping out how you will take care of you, the relationships that matter, be your best in your career, and make the contribution in life that fills you up. Everything else? It’s just window dressing.

In this video, I talk specifically to the 30s demographic, but the truth of the message is relevant at any age. Please share this article if it is has value for you.

P.S. 3 Circles Living is now available in an audiobook. Here is where you can order it if you’d like to!