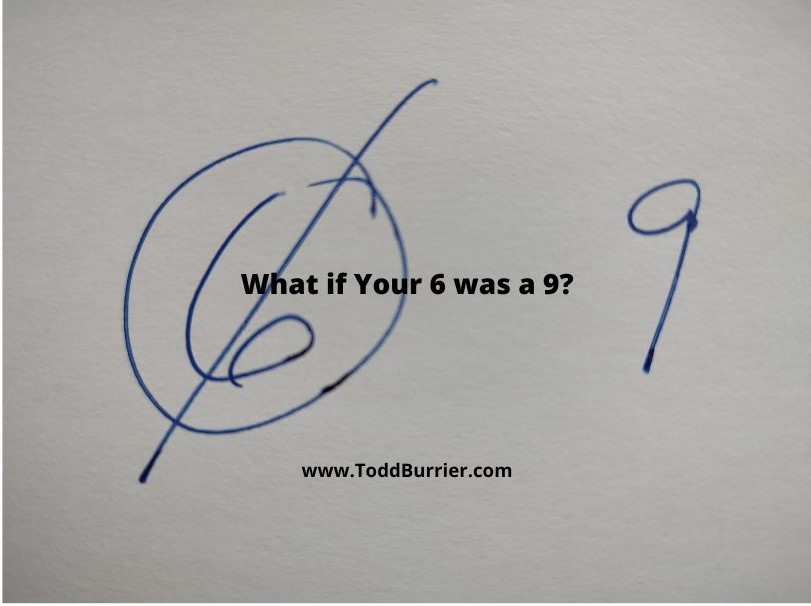 I was cleaning the toilets the other day listening to Jimi Hendrix and this song (If 6 was 9) came on. This has long been one of my favorite Hendrix songs from a lyric’s standpoint.

The essence of the song from my perspective is that your way to live might be a 6 and my way might be a 9, each’s way may seem upside down to the other, but I don’t mind. Just because the hippies cut their hair, doesn’t mean Jimi had to cut his since everyone has their own life to live and it doesn’t have to be like someone else. And that should be fine.

I also see this in relation to many other aspects of life. What if certain things we saw as a 6, could become a 9?

For some background, Jimi Hendrix was my favorite musician. He had a meteoric rise to fame in 1967 and died after 4 years of stardom from an accidental overdose of sleeping pills (some say it was purposeful, but the events of his life in that timeframe and what he was working on do not indicate it would be). The Rock and Roll Hall of Fame called Hendrix: “arguably the greatest instrumentalist in the history of rock music”. He was a pioneer and visionary who was the first to do many sounds with a guitar that are now mainstream (through the use of technology that didn’t exist then). Here is a link to an article in Rolling Stone magazine after his death https://www.rollingstone.com/music/music-news/jimi-hendrix-1942-1970-93969/

It would have been interesting to see what would have happened with his music and impact had he lived…in other words, and alternate outcome…if the 6 turned out to be a 9.

I started listening to his music at the age of 16 through a friend of mine, and it happened to coincide with a period of my life when I went very sideways for many years. Many years of partying daily, avoiding real life, numbing myself so I didn’t have to deal with how much I didn’t like myself. In this period of my life, accomplishments were very few. It would be so easy to look back at that part of my life and see the “6” that represented wasting 12 years of life, missing so many opportunities, quitting on so many things. And during those years, I could ONLY see the “6.” I was a waste of oxygen, so I partied harder.

Now I only look back and see the “9.” There are so many wonderful things that came from this period of time that are foundational to who I am now. That period of time reveals so much. There were several occasions where I came close to death or getting into serious trouble. But none of them happened…helps me consider maybe there is a purpose for my personal existence and contribution, regardless of how humble and small. I also had many fun times and many life experiences that I’ll never forget. I learned how to survive on my own (I lived on my own starting at age 18) even at fractional capacity. I got tougher, more resilient. It helped me build a well of empathy I can draw from in relating to others that only seems to deepen with time.  There are many things I am grateful for from this time that would have been a bad 6 to many. The most impactful thing of this time was that it culminated with meeting Melanie my wife, girlfriend, and soul mate (which would never have happened under any kind of “normal” (6) trajectory). I tell some of the specifics of how we met in 3 Circles Living). When I hear Hendrix music it give me happy feeling because of how meaningful those years turned out to be.

Where in your life can you look back and see the eventual 9 from the 6 you used to see? Turning regret to gratitude.

I kept thinking about this song as the day went along and decided to share some other things that rolled through this perspective in my brain. What if 6 represented how some aspects of the world tend to be and 9 represented a different choice?

Here’s a Few From What I’d Like to see…

What if people were ALL kind, honest, and respectful….if 6 was 9

What if money didn’t drive politics…if 6 was 9

What if we gave ourselves the same grace when we make mistakes, as we give to people we care about…if 6 was 9

There’s many more I could write here, but you get the idea. What are some of yours?

I hope this brief article gives you pause and inspires you to turn some of your sixes into nines.