The Power of a Clarifier 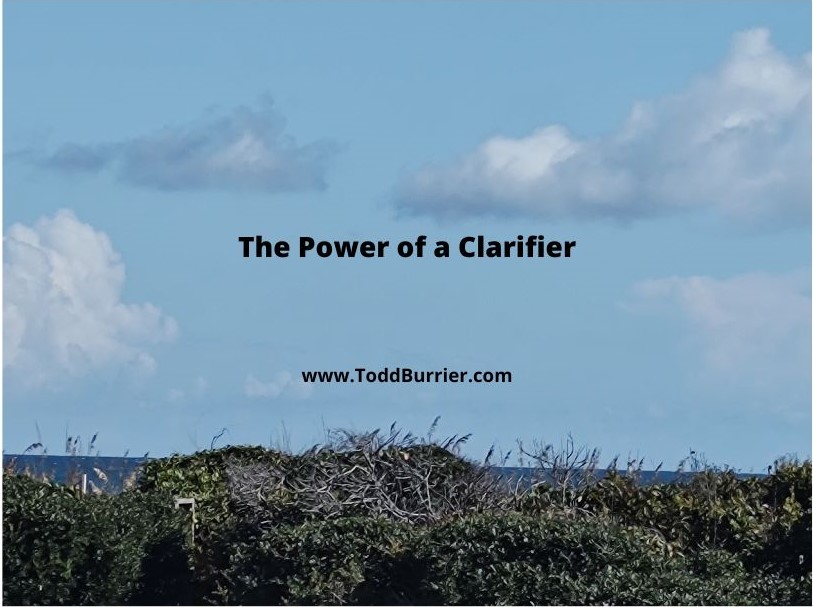 This is such a simple, effective formula. And yet, it’s not very common in practice. Instead, what is more often occurring is: Hear, and then interrupt.

I differentiate listening and hearing, because they are in fact different. Hearing is a gift. Listening is a skill. It’s such an important and valuable skill that I believe that being an excellent listener in today’s world is a “superpower.”

That’s an opinion based on a LOT of experience, and it’s also based on the fact, that while listening is one of the most basic ways we can show someone respect, that they matter, that we care, that we value them, and further, that we love them, the majority of people are not very good at it.

I’ve written about listening several times over the years, and while it’s part of this article, the thrust of this is a tool that demonstrates listening and drives rapport, trust, and connection deeper.

Before we dive into the clarifier impact, we have to address the “pause.”

Let’s call it a “conscious pause” because we have to be purposeful to do it. And it is very much worth doing. The pause should be at least a few seconds. This is NOT easy at first, and requires awareness of the value of doing it, and commitment to practicing it.

Here’s some of the reasons why you want to do this:

It will keep you from interrupting (an interruption is like saying, “I don’t care what you are saying. It’s more important that you listen to what I have to say.”).

It keeps you from immediately refuting/advising/giving an opinion. (this is very important because there is a gap in almost all communication between two people, based on a variety of factors. The gist of this is that your tendency will be to comment based on what YOU THINK is being said, which is often not what is being said).

It encourages them to talk more. (people often have difficulty allowing there to be a moment of silence, so they will tend to continue talking and share more.)

It indicates you are giving consideration to what they said. (this is an indicator that you really are listening to them…which builds trust and is the beginning of them feeling understood.)

It allows you the time to process and consider what to ask next. (This will be where the clarifier can come in.)

There are more benefits to the conscious pause, but you get the idea.

The third part of the simple little formula (this is the first of three formulas that build on each other) is not “you get to talk.” It’s ASK.

And it’s crucial, because at this point you are still considering what was just said based on your perception of what the other person meant (that is likely subject to multiple assumptions). This is where the clarifier fine tunes the conversation and brings you into unison with your counterpart. As an aside, but certainly of high relevance is that assumptions (which we cannot help but have) are a huge component of the communication gap, and have to be “tested.”

By asking a clarifying question, you weed through all the words (and emotions), and assumptions, to get the truth of the point. Clarifying questions are designed to capture the context and meaning the speaker intends. Anyone who knows me, and then hears me train, recognizes immediately that I do this often.

You can ask a closed-ended clarifier or an open-ended clarifier. A closed example would be to say something like “are you saying (and then repeat what you perceived)? The other person can say yes or no and both are valuable in that you get closer to the true meaning, and you demonstrate that you care about understanding. An open clarifier would be something like “what do you mean when you say…? Or a simple one, and my personal favorite is “what do you mean by that?”

With an open clarifier, the person will typically say something different than the previous words and tend to be more descriptive and detailed. This is gold.

You are seeking to fully understand, which will lead the speaker to ultimately “feel” understood. This takes your counterpart to a place they don’t often get to go to in today’s world. A place where they feel listened to and understood. You, just buy asking a simple question, will stand out from most everyone they engage with over the course of a week.

Here are some clarifiers to get you started. You may already have a “go-to,” but these will help you refine:

For my own understanding…

What I’m hearing you say…

How do you mean…

Can you say that in a different way?

What do you mean…

It appears to me you are saying…is that true?

Listen (with all of your being)…pause…and ask a clarifying question and watch your communication experiences soar.

Here’s a video from 4 years ago that gives you some other Listening nuggets. You will also find listening insights in 3 Circles Living since this is foundational in strengthening the Relationship circle.