Just Take the Next Step 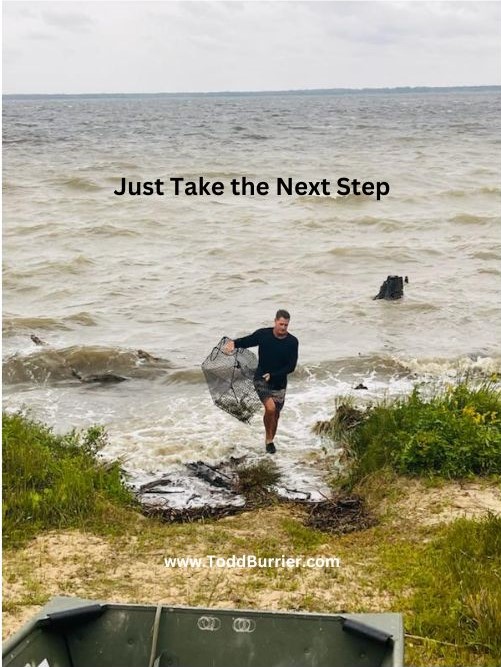 But that doesn’t make it any less true.

We always have a choice in life. When we are struggling, worn-out, frustrated, overwhelmed, and just plain don’t feel like we can continue, we can choose to keep going. You are capable of so much more than you know. It makes no difference what it is that you are doing for the most part, if you simply refuse to stop, you can get there.

I once heard someone say “If you don’t feel like quitting sometimes, you aren’t trying hard enough.”

I remember when I was playing basketball in high school. We had to run these sprints called separators. A separator is when you stand on the baseline (the end of the court if you are not familiar with basketball geography), sprint to the foul line, back, sprint to half court, back, sprint to the other foul line, back, and sprint to the other baseline, and then back. That was one separator. We often ran doubles, which meant we had to do two of these without stopping. Then we would rest while the next group did the same. Then we would have to do it again.

Sometimes in the middle of these, I would be throwing up anything left in my stomach from the day. Every part of my body would say “Todd there is no way you can run another step.”

And then I would. If I wanted to be on the team. I had to run as many as the coach said, regardless of how I felt. It was a price I would willingly pay to be able to have the privilege of stepping on the court to play the game in front of the crowd.

This is one of the reasons I love sports as a preparation for life. This mental discipline positions you to be able to take one more step in those times when you don’t feel like you can.

Every Successful Business Requires This Mentality

If you look at the people who have created success in any kind of business, you will see that they are all different. You cannot tell what someone will accomplish by looking at their personality traits or their background. The thing that will tell the story is beating in their chest. The heart to continue when the going gets tough, when it feels like at every turn there is a roadblock, when it feels like nothing that is tried is working, these are rites of passage.

Successful people simply take another step when every ounce of their soul is saying “what’s the point? It’s not working! You’re not making progress!”

And then you do.

I have been stuck in the same spot countless times in everything I’ve ever done that eventually added up to some measure of achievement.

And I bet you have too.

Ignore them. The naysayers want you to quit, so they don’t feel as bad about not sticking it out in their own journey.

You will also find discouragement if you look at others who have made it already in the same field of endeavor that you are trying. I can tell you all day to just see them as proof that you can too. But you likely won’t. So ignore them as well, unless you can learn from them.

Otherwise, it’s important to recognize they are running their race. You have to run yours. You just need to take the next step regardless of how you feel or how it’s going.

I promise you, that if you will just hang in there and keep going, keep learning, keep trying…. you will break through.

It’s usually in retrospect that you can look back and see what the path actually looked like. Growth curves are shown going up. They are points of growth to points of growth. Between these points though, are many steps sideways, back, around, over, under, and yes, forward.

Since you cannot know the meaning of the next step, the direction isn’t as important as the intention. Intend to keep going and in essence each step is taking you closer. You just have to commit to keep going.

Your difficulties teach you perseverance, which builds your character, which makes you stronger, more resilient, and breeds hope. Stay at it and never give up.

I say this to you as a reformed quitter. I know how it feels and I continue to experience this feeling frequently in life. It is an essential part of a life worth living. Constantly be in pursuit of being your best self and accomplishing what is in your heart to do.

Keep taking the next step.

In the video I share a powerful story and I encourage you to watch it.