What if We All Just Did What Needs to Be Done? 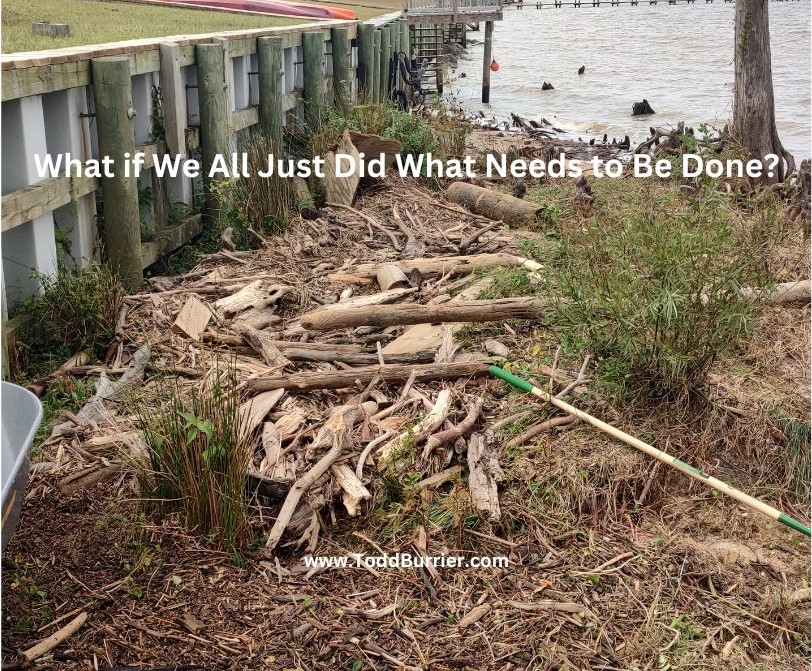 I Think Littering is a Despicable Act.

Living on the water, I am consistently picking up bits of trash that I find in the water or on the shoreline. Anything I see that is not biodegradable and that I can physically deal with, I gather. Fortunately, it appears that the people in our area are conscious of taking care of the environment, because there is relatively little of it considering the size of the body of water.

On the water, the litter comes from people who are using the water (often not on purpose…stuff flies out of boats unseen all the time) and from the surrounding landmass when it rains (the litter on streets gets washed into the waterway). Plastic is the biggest evil because it ultimately harms the wildlife.

Anyway, I clean up as I go, because it needs to be done. No one sees me do it and I need no acknowledgement for it since I believe it is my responsibility to do it if I see it, and am in a position to do something about it.

I know I’m not alone, because we just had the remnants of hurricane Ian go through the area, and the wind direction combined with our positioning on the river made the beach at our house one of the prime destinations for everything and anything in the water to come to rest. It was refreshing to see how little actual trash was in the mass of flotsam on our beach (as you can see from the picture above- and this is only part of the stuff that washed up-most of it was sticks, branches, logs, and planks from docks).

Anyway, this story is not about me, it’s about a guy who walks our neighborhood early in the mornings, who’s efforts dwarf mine.

“I Live Here Too”

I don’t know this fella’s name, only that if you are out and about at the right time, you will see him every day walking with a bag and a stick cleaning up any trash along the road.

I typically see him on the days I go to the gym before 6am. It is rare to see any trash along the mile plus stretch of road from the main highway down to our home, and if you do see some, it will be gone the next day.

One Saturday recently, I was heading to the gym around 9am. As I got near to the highway, I saw him out there doing his thing. I rolled down the window and we chatted for a moment. I mentioned that this seemed late in the morning for him to be out. He told me that he could do it later on the weekends because he worked during the week, so he had to do it earlier then.

I had just assumed he was retired prior to this conversation, so it dawned on me how dedicated he was to be doing this. Would you voluntarily get up in the morning an hour earlier so that you could pick up the trash left by others, who won’t know you did it? When you’re tired and have your own life to deal with?

I told him how much I appreciated what he did and how awesome I thought it was. All he said was “I live here too.”

They are words of personal responsibility. He didn’t say them like “someone’s got to do it” or “no one else is doing it”. He said them matter-of-factly, like “what else would you expect me to do?”

Think about the impact this kind of attitude would have if we all had it? In all parts of our lives?

At work, what if we never considered whether something is our job or not, and just pitched in and did what we saw needed to be done?

How about at home? How often do we get irritated because we think we are doing more than others (I call this keeping score by the way and I talk specifically about this in 3 Circles Living, it’s a sure-fire way to create resentment and tension, and usually we have no idea what the score really is anyway! Oh, and as an aside…in a marriage the score is always ONE. Let that rattle around in your head for a bit:-).

Here’s the point of all this. Human beings are a bit like pack animals when it comes to doing stuff. If we see enough of the pack doing something, we tend to start doing it too. We follow examples in all facets of life.

There have been many studies of how entire sections of a city have drastically changed for the better because a small group of people decided to set an example and take responsibility for cleaning it up. Before you know it, everyone is doing it.

The interesting thing in those studies, is that the people who weren’t purposefully involved in the clean-up efforts, simply started taking better care of the area around them. In other words, they became responsible in keeping things nice.

It has to start in the heart. It’s not something you can tell people. You just have to do it.

It really is true that if you want things to change, you have to start by being the change you want to see. We can’t sit around and wait for others to do things. We can’t NOT do our part just because others aren’t doing theirs.

It’s okay every now and again to be angry or upset or frustrated, but don’t let this be an excuse for inaction. Don’t let the lack of responsibility of others keep you from setting the right example. Channel this into doing what needs to be done.

Take the responsibility attitude in all things and start.