How to Bridge the Ever-Present Generation Gap 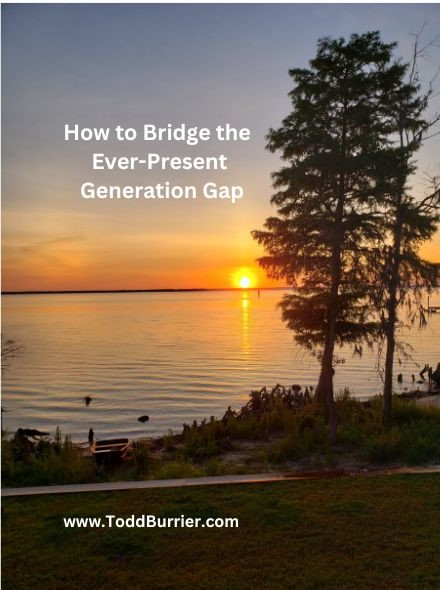 “How do You Handle People of Different Generations?”

This is a question/challenge that comes up often in leadership training workshops. And for good reason. There is a natural gap between generations that tends to breed a “we” versus “they” kind of attitude, and can make connection and communication difficult.

This article could easily be focused purely on the leadership lens, since that’s how it originally came to my attention, but that would be too limiting. Sure, this is a leadership issue, but that’s because it’s a societal issue, so Instead, the focus will be on connection in general, since that has to come first anyway if you are trying to lead people and is correspondingly relevant for all corners of your life.

The Who famously sang:

People try to put us d-down (talkin’ ’bout my generation)

Just because we get around (talkin’ ’bout my generation)

This song was released in 1965 and is considered by Rolling Stone Magazine as the 11th greatest song on their list of the 500 greatest songs of all time.  Pretty much every young person can identify with it because the lyrics above capture so much truth in such a short set of words.

The generation divide has been around since there WERE generations I suspect. I can’t confirm this as while I am certainly getting older, I’m not in my thousands😊. It’s just common sense.

When I was growing up, my mom would talk about how I had it better than she did and didn’t know what having it really hard was. That the world was going to you-know-where in a handbasket, and things used to be so much simpler, and the ultimate of course always began “young people today…or kids today…”and then finish with whatever awful thing my generation was doing, thinking, saying.

On my side of things, I would think how could she understand what I’m dealing with? And what she thinks is outdated and doesn’t apply to me, after all, she’s OLD. Haha, this is when she was in her 40s…which today would be the generation BEHIND me!

I didn’t listen to her and she didn’t listen to me. Now don’t get me wrong, I had a wonderful relationship with my mom and this doesn’t represent a constant state of things, but this is the simple reality of the difference in generations.  I could use other examples of adults I encountered in my youth and how they talked down to me and how I felt about them as a result, and I’m certain you have your own examples that fit this mold.

The Baby Boomers are the oldest, born between the years 1946 and 1964. They are between the ages of 56-75 years old, and nearing retirement or in it.

All of these generations are unique in that they grew up in eras that had significant differences in technology than the prior one, with greater access to information.

Each generation goes through things that defy the “truths” they were taught, which naturally leads to questioning the validity of everything else.

And it all begins with the all-knowing perspective of the teen years, for ALL of us. This is where we think we are the smartest and yet we are usually at our overall dumbest. Not intelligence wise, but perspective wise. We mostly have about a ten-year window of time, where virtually no one can tell us anything, and the culprit is the generation gap.

The Solution is Simple, and It Starts from the Top Down

Here is the answer: RESPECT

If you have been following my work for any length of time, this word comes as no surprise to you, and you probably already guessed this is where I was going.

But knowing this is the answer is irrelevant if we don’t know how to put it into action. So, I’m going to close here with two things: perspective and action steps.

Every generation thinks the one before them is outdated. And in some ways, this is true.

Each generation does remarkable things that the prior generation couldn’t have even imagined.

Each generation bares the fruit of the prior generation’s innovation, as well as the unintended consequences.

Each generation is charged with correcting the prior’s mistakes while making their own for the next generations to deal with.

And here is the kicker in the common-sense category: All people of all generations, are human beings who experience the world through emotions first, then logic, and these feelings are influenced by many things that are unique to each person. Growth FEELS the same for everyone, regardless of era. In addition, basic human needs (aside from food/shelter kind of needs) are also shared. We all want to feel loved, valued, cared about, that we matter, etc.

Pull out your “old shoes.” If you have been in one of my leadership universities, you immediately know what this means, if not, here’s the deal…old shoes are your experiences in life from various stages. When you think back on your path, and the things you went through, don’t just think about WHAT you went through, think about how you FELT going through it. This engages you empathically and allows you to get out of your head in a situation and remember that this is a person in front of you who is dealing with life. This doesn’t change facts in a situation, it softens your approach and gives you something (a story) to use in connection, in addition to the thoughtful consideration of the reality this person is experiencing.

Listen First. So simple and yet so darn hard for most people to do. You are not learning ANYTHING in a situation by talking, and you definitely aren’t engaging another person to share deeply with you. Especially when speaking to someone younger. No one cares about your wisdom, assuming you have some, until they believe you fully understand THEM.

Test Your Assumptions. After you’ve listened, instead of sharing your brilliance, ask questions to make sure you actually DO understand. You cannot help but to make assumptions. They are only a problem if you speak without clarifying, because then you prove that you don’t get it.

Ask for Their Ideas/Input. This shows you value them, and you need it anyway. You are just one person and I don’t care how smart, successful, or experienced you are, you don’t know everything and can’t see all possibilities.

This is how you put respect into action. There’s much more I could give you about the nuances, and more ways I could give you to show respect, but these four things will make a big difference over time.

And this “over time” recognition is crucial. You cannot microwave respect as a social platform because it requires mutual participation. You have to give it FIRST. Which, generation wise, is why it has to start from the top down. You showing respect for a younger generation won’t immediately undo how disrespected they have felt, but over time, with consistently showing respect, you begin to garner it back. And eventually the dialogue becomes actual communication and connection.

I know this was a lot, but actually it’s tiny compared to how big of an issue this is. I hope you found this helpful and worth considering, demonstrating, and sharing.