How to Normalize the Best Source of Change 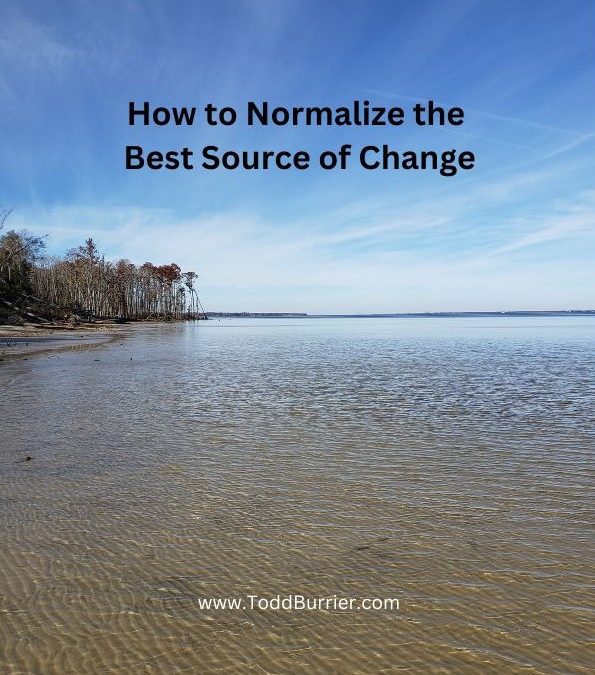 What Causes You to Make an Important Change?

You could consider this for your life in general or for your business life, it really doesn’t matter because the cause/effect/result/significance is the same. You either make changes or you suffer the consequences of not changing.

The truth is you have some suffering either way, don’t you? Change is hard in many ways…learning new things, being patient, getting uncomfortable, fear of being wrong…there are a lot of challenges with changing and I’m sure you have your own to add to the list.

Here’s a really simple thing to put in your pocket…If you don’t like the way something is in your life, change something. You have freedom of choice, and you only get one life that I am aware of, so what in the world do you have to lose?

There are Two Classic Change Stimulators.

One of my life mentors from afar was/is the late Jim Rohn. He was the one who introduced this idea to me, though I doubt he originated it. He said that change comes from either desperation or inspiration.

I imagine that if you think about this for just a second you will see this in your own life and recognize the truth of it. These aren’t the optimal causes for change, but they are certainly useful.

Desperation is usually a result of some measure of neglect (a tiny percentage of desperation in our lives comes from sudden crisis). If something has reached the point where you become desperate, it probably didn’t sneak up on you. It’s been an issue for a while, and you just let it get worse and worse. Maybe you thought it would fix itself? Maybe you thought if you just ignored it, it would go away? Or maybe, you just didn’t want to go through the pain of dealing with it? We all have our stories here, and there’s a chance that you still have some of this going on…something that you are going to have to change sooner or later, but you just won’t do it yet.

Change born out of desperation is harder than making the change before your desperate, but just like procrastination, we seem to think we can keep putting something off until suddenly we can’t. The consequences have become dire enough that we are no longer comfortable enough not doing something about it.

This is where I was way back when. I started my first business out of desperation because I could no longer tolerate doing something I hated. I grabbed at the first business idea that struck me in this vulnerable place. In the long run, this was still a great thing for me to do, because it started the journey that led to a pretty awesome life, so that was still good, but the point here is that I grabbed the first thing. You see the downside of the desperation stimulus is you don’t see all the options. It’s the same as when you are trying to solve a problem. The biggest obstacle to finding the best solution, is the first solution you come up with. You get tunnel vision. The relief of finding some answer, clouds your mind. Another truth is that emotional lows are poor times to make decisions, and desperation is generally an emotional low. Change from desperation is still a good thing, because you are doing something, and even if you make some poor choices, you are taking back control and over time you will get to a better place, but it’s the least favorable cause.

Inspiration is An Entirely Different Animal.

You don’t typically see it coming. You don’t wake up one day and say “I’ve had it, I’m going to become inspired now.”

It can come from anywhere at any time. A book, a video, a speaker, a story a friend tells you, while you are sitting still drinking iced tea….Boom. It’s a sudden emotional, energized, anything is possible, yes I can, kind of vibe. It feels fabulous. And it’s fleeting.

If you don’t begin initiating the change that you are inspired to make relatively fast, the feeling leaves you. Instead of all the wonderful things you could clearly see in the inspired moment, now you are left with the negative what-ifs. If we are NOT in a desperate situation, then we are by some measure comfortable, and comfortable is not a great motivator of progress.

We have to begin doing something towards the inspiration immediately, even if it’s a small step. However, just like the too low emotions of desperation, inspiration is a too high scenario. We aren’t seeing lots of aspects and we can take a lot of wrong steps and miss a lot of important things that would help us succeed more readily in progressing forward. Our potential to fail is increased by the opportunity to fall back into the comfort zone when the inspiration feeling is gone, and thus not being willing to push through the hard stuff that will be required.

Again, this is still better than no change, because we are in action. Positive change needs to be an action habit. Most entrepreneurs fail several times before, and while, they succeed. Some of this is a product of acting on inspiration, but the fruit of each failure is the learning and growth, and eventually they win because they consistently act when inspired.

Both desperate change and inspired change lead to better results in life, but they are like the kindergarteners of change and pale in comparison to the golden nugget of change, and that is…

Wisdom is the ultimate proactive change agent. It mostly comes through the learning of reflective hindsight (past encounters with desperation and inspiration), combined with the deep understanding that change is ESSENTIAL.

This Wisdom approach can be purposefully learned and consistently acted on, WITH the right training and development.

A clear example of how we grow to this has been demonstrated by my management/leadership students over the years in workshops where we talk about change. When asked to fill in “Change is _____” groups with less experience use words like scary and hard, more experienced leadership groups use words like necessary and constant.

The more experienced groups are demonstrating the first part of the wisdom equation. They have learned the value and essential part. But are they consistently acting on it?

Action is the key to consistent positive change in all things. You see, the power of wisdom driven change, is that it’s patient, thoughtful, even-keeled, purposeful, based on values, principles, beliefs, and is set in motion and taken step by step without wavering.

How you get to this is actually relatively simple once you recognize its importance.

It starts with a Quadrant 2 approach (proactive and planned) of dedicating time consistently to a series of “Trigger questions.”

Here are some of my favorites:

What is a consistent cause of irritation/frustration?

What is going so well that I’m taking it for granted?

Where am I getting bored?

What is something I know I should be doing, but am not?

What am I missing?

You can come up with your own, but asking questions, especially trigger questions is a great way to get your mind to work on things that are important to change that you are aware of but haven’t actually put your finger on yet.

Once you start assembling answers to the trigger questions (I didn’t include the obvious things like where are we in crisis mode the most? Or Where are we getting the most complaints? Etc.)

Then you move into the next Q2 activities and begin research and analysis. From there you move into decision-making, and then you go to strategy, planning, implementation, etc.

This path is a wisdom-based growth oriented consistent approach to normalizing change and once you normalize this as a proactive process, you eliminate the famous resistance-based business kiss of death words; “That’s the way we’ve always done it.”

This remains true for human fundamentals and core processes, but not for anything else. In today’s world, if you think what you’ve always thought…you will get a lot less than you used to.

Change is really just evolution and development for the wise. Be wise, and you will rarely be desperate, and your inspirations will be put to better use.

I hope you have found this of value.